The history of the king james version The History of the King James Version

The Bible was written by many men, living at different times, spanning a period of hundreds of years. Many were complete strangers to one another.

Some Bible writers were shepherds, fisherman, preachers, and kings. They came from all walks of life. Yet all of them were men inspired by God.  In fact, in the Children's Catechism, an introduction to the Westminster Shorter Catechism, the question is asked: "Who wrote the Bible?" The answer:  "Holy men who were taught by the Holy Spirit."  This response is taken straight from the letter Paul wrote to Timothy where he says, " All Scripture is given by inspiration of God." (II Timothy 3:16, KJV)

This Holy Bible is contained in two sections, the Old and New Testaments - the Old Testament written in Hebrew and the New Testament mainly in Greek.

The Bible was handwritten in the centuries prior to the invention of the printing press, written onto scrolls and later, paper.  The first translation into Latin, the Vulgate, was completed by Jerome in the late 4th century, becoming the version used by the Roman church.

Many texts were preserved through the dark ages by the priests and scribes who copied texts in various places. As the centuries wore on, the church and its clerics became the only ones who could actually read the Bible. John Wycliffe was an early proponent of the idea that the Bible should be accessible for the common man, and he was the first to translate the Bible into English, completing the project in 1384. The advent of the printing press in 1440 meant that the Hebrew, Greek and Latin texts copied laboriously by hand were now available more readily, and more scholars had access to these original texts.  One such man was William Tyndale, who completed his translation of the New Testament in 1526. Unlike Wycliffe, who only had access to the Latin Vulgate, Tyndale was able to translate from the original Greek texts.

Both Wycliffe and Tyndale were church martyrs, Wycliffe declared a heretic posthumously and Tyndale burned at the stake for making these bold translations available. As the Reformation simmered and boiled over, the Roman church lost its fight to control Scripture and its interpretation, proving, as it says in Hebrews that the "word of God is quick, and powerful, and sharper than any twoedged sword..." ( Hebrews 4:12 KJV)

In England the landscape changed rapidly, as England left the Catholic church under the reign of Henry VIII and formed a new state church.  Acceptance of an English translation grew and many in the church and laity turned their hand to translation, often with margin notes along either protestant and reforming lines or promoting a church hierarchy.

In 1604, King James I of England, himself a religious scholar who had re-translated some of the psalms, sought to unite the differences into one universally accepted text. The commissioning of the KJV Bible took place in 1604 at the Hampton Court Conference outside of London. It came in response to the perceived problems of the earlier translations as detected by the Puritans. King James appointed the nation’s finest language scholars and approved rules for carefully checking results.

Six committees in Oxford, Westminster, and Cambridge rendered different books of the Bible. The translation was done by forty-seven scholars lasting seven years. These scholars examined every word with continuous peer review to determine the most accurate translation. 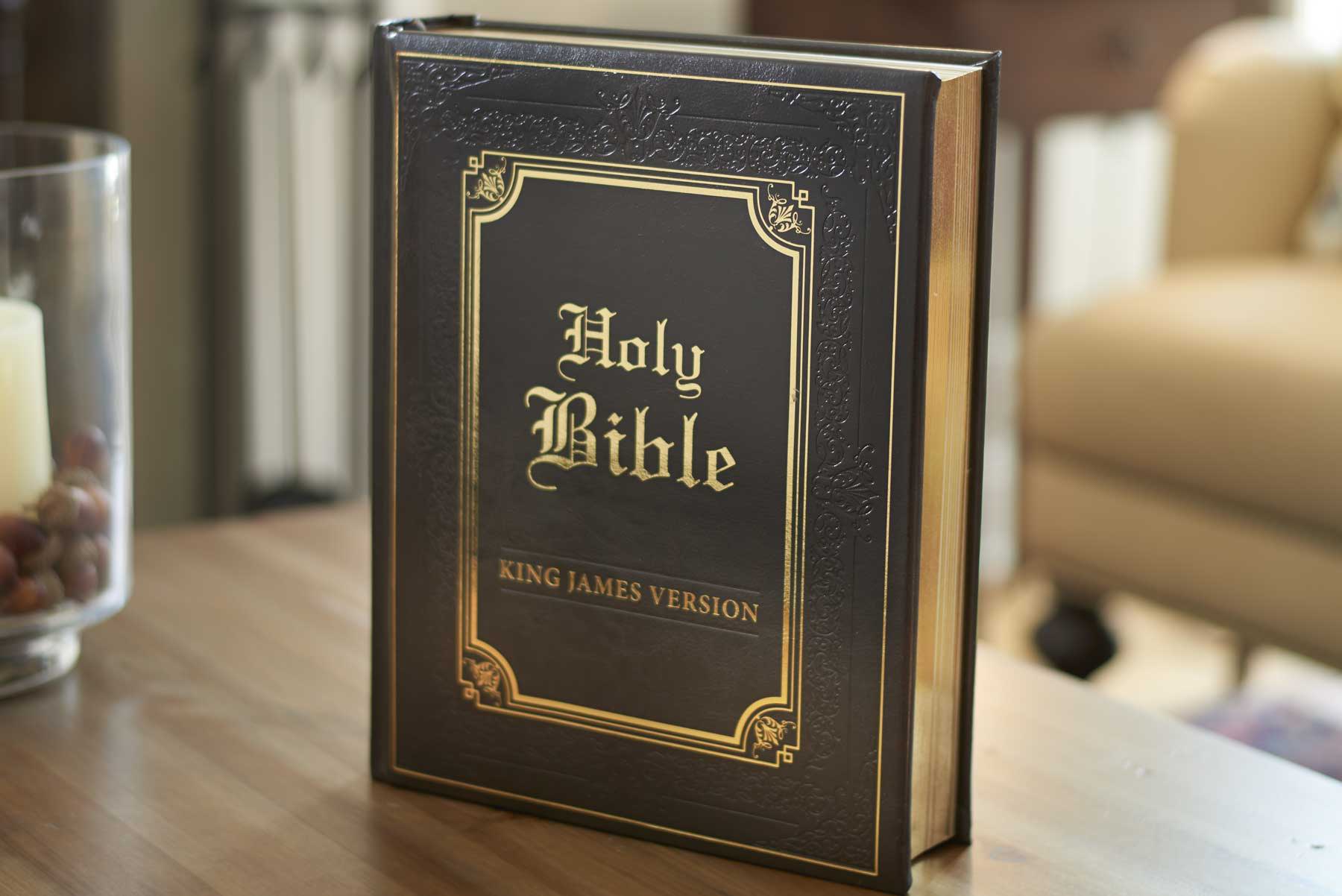 The first edition of The KJV Bible was made official in 1611. It included the thirty-nine books of the Old Testament, the seven Apochraphal books, and the twenty-seven New Testament books.

This new version of the Bible was more faithful to the original languages of the Bible and more scholarly than any of its predecessors, and is widely regarded as one of the major literary accomplishments of early modern England.  Interestingly, the words and phrases of the KJV now integrated firmly into the English language are words that stem from both Wycliffe's and Tyndale's translations of the Bible.

The KJV Bible has been reviewed and edited since its original 1611 A.D. printing, which has reflected changes in the English language. The English between the 1611 version and the newer 1769 edition is considerably different.

The seven Apochraphal books were also removed (King James Version, Standard Edition), giving it its common sixty-six books of the Bible and an accurate message from start to finish.

Many people consider the King James Bible the ultimate translation in English and will not allow any other for use in church or schools.

It has only been in the last half of the 20th century that newer translations of the Bible have become more widely accepted.  To this day, the King James Version is the most widely read version of the Scriptures, and remains one of humanity’s most prized religious works.

The book is cited as the most published book in world history with a significant influence on literature and culture. It is estimated that over 1 billion copies of the King James Version Bible have been published.

Discussion for bible The History of the King James Version King James made a name for himself with the King James Bible.  A translator and scholar himself, he commissioned this new translation amidst political disagreement about church reform and authority. Give your grad the gift of God's eternal unchanging word in the King James Version. Check out 10 curated graduation gifts from KJVBibles.com. Find your mom in the KJV's description of the Proverbs 31 woman. Strength and honor are her clothing! Her children arise up and call her blessed! KJV Bibles has great gifts ideas for Mother's Day. Check out this Mother's Day gift guide to find the perfect gift for Mom.