Idioms and proverbs are a curious part of any language, and one of the hardest parts of a new language to learn.  For example, English speakers don’t look puzzled if someone says, “Don’t beat around the bush.” They know they need to get to the point.

In the English language, many of these phrases come from literature that influenced the people of England while the language was still young. Two of the most influential pieces of literature during this time were the plays of Shakespeare and the 1611 King James Bible. Victor Hugo, beloved author of Les Miserables, once said about these two works,

“England made Shakespeare, but the Bible made England.”

The Church of England was deeply intertwined with the political sphere. As a result, the Bible did not merely influence England’s religious landscape, but also its culture and politics. This era saw the development of the English language as we know it and many of our English idioms come from the Bible, specifically the King James translation of 1611.

Let’s look at a few of these well-known idioms and their meanings.

1. Pride Goes Before a Fall 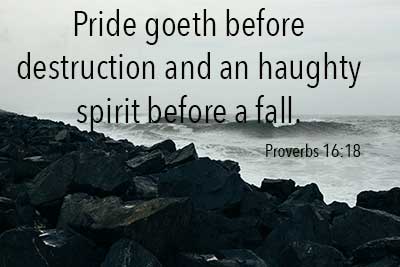 This familiar phrase comes from the book of Proverbs, one of the books of wisdom literature in the Bible, which includes Job, some of Psalms, Ecclesiastes and Song of Solomon. Proverbs was written by King Solomon, a man renowned for unparalleled wisdom.

Today, this phrase is often used by the elder toward the younger, warning of someone getting too confident, or confident beyond what’s warranted.  A big ego – or pride-  often misleads a person into dangerous risk or rash and misguided decisions.

In our current culture of celebrity combined with social access, we watch this proverb play out in the lives of business, political and sports personalities.

It’s interesting to read the verse that follows this one in Proverbs:   “Better it is to be of an humble spirit with the lowly, than to divide the spoil with the proud.” Proverbs 16:19

Better to keep your head down and be propelled by confidence and humility.

2. How the Mighty Fall

As a parallel to the previous phrase, we use this idiom to describe the tragic and dramatic way that powerful and successful entities or people fail.  From Athens to Rome, to the decline of the British Empire historically to the Enron scandal, the tumble is high and long.

Often this phrase is used because the fall is so sudden and unexpected, as in the Audi/Volkswagen scandal, or Lehman Brothers in the mortgage crisis. We use it to express shock or the extent of the damage.

Ironically, this phrase originates from a true and heartfelt lament from the mouth of King David after King Saul and his son Jonathan, David’s closest friend, are killed in battle.  “The beauty of Israel is slain upon thy high places: how are the mighty fallen!”  2 Samuel 1:19 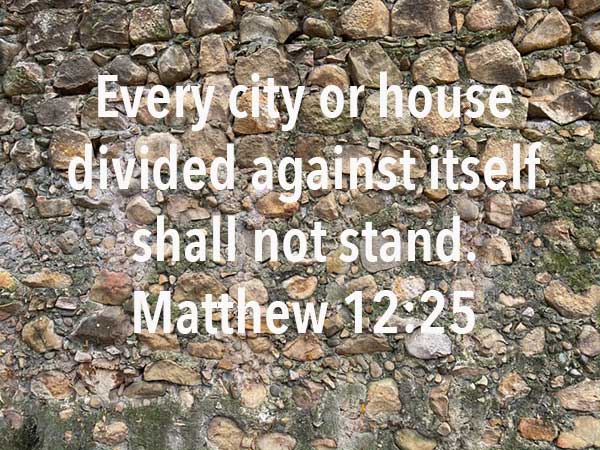 Abraham Lincoln made this phrase famous in his “House Divided” speech at the close of the Illinois State Republican Convention in 1858. He used it to express his doubts that the United States could continue as a united government while half-slave and half-free, foreshadowing the Civil war conflict.  It is said that he used this phrase, from Matthew 12:25, because it would be a well-known and therefore powerful phrase taken from the King James Bible.

In the King James Bible, Jesus uses this phrase to argue against the accusations of the Pharisees.

Parallel quotations are found in the Gospels of Mark and Luke, but this is the context:

“But when the Pharisees heard it, they said, ‘This fellow doth not cast out devils, but by Beelzebub the prince of the devils.’

And Jesus knew their thoughts, and said unto them, ‘Every kingdom divided itself is brought to desolation; and every city or house divided against itself shall not stand:

In this passage, the Pharisees accuse Jesus of performing miracles, specifically exorcisms, in the name of Satan (Beelzebub). However, Jesus explains that this accusation is absurd. Why would Satan form an alliance with Christ, his enemy, to defeat his own minions? Clearly, the Pharisees were oblivious to Jesus’ ultimate mission to destroy Satan and his army of demons once and for all.

The principle behind the proverb, in the way it is used in our contemporary world, still holds true. A community at war within itself is doomed to failure.

4. The Blind Leading the Blind

Let them alone: they be blind leaders of the blind. And if the blind lead the blind, both shall fall into the ditch (Matt. 15:12-14).

You have probably heard “the blind leading the blind,” or a similar permutation used to describe the danger of incompetent leadership. A leader who lacks the skills or character needed for his or her position of influence is a liability to the entire community.  He could be headed toward the “fall” described previously, as will his followers.

Jesus was unrelenting in his criticism of the Pharisee’s hypocrisy, and they got mad. His disciples suggested he be more careful, but this is his response:  “Let them alone, they be blind leaders of the blind.”

This idiom holds its meaning in modern language – if a leader knows only as little as his followers, neither will see clearly to understand what is true and right, and to move forward successfully.

5. A Little Bird Told Me 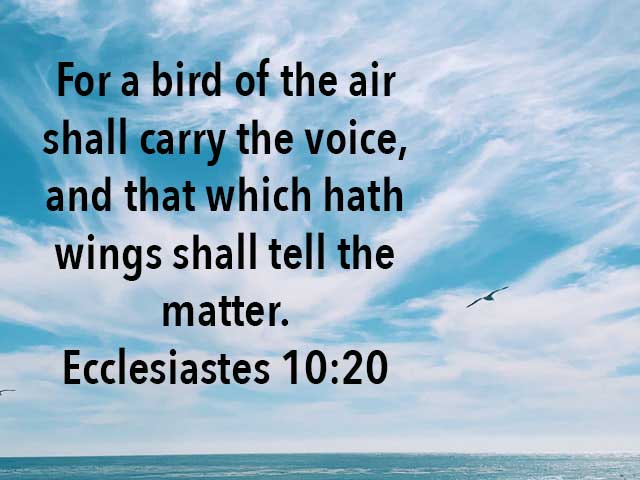 On a lighter note, this funny idiom is used to say you know something about someone, but you are keeping your source a secret.  Often used in a sly but good natured way, it might be used to prod a friend to give up some bit of information not intended for public knowledge, i.e. that they have a new boyfriend or girlfriend.

Interestingly, this has been in common use over the centuries.  While it could reference the idea of a messenger pigeon, the phrase is most often attributed to this verse in Ecclesiastes:  “Curse not the king, no not in thy thought; and curse not the rich in thy bedchamber: for a bird of the air shall carry the voice, and that which hath wings shall tell the matter.  Ecclesiastes 10:20.

Most likely written by King Solomon, this phrase suggests that you may want to keep criticisms to yourself, as you might not be able to trust someone who overhears – and you may be betrayed through the passing of gossip.

6. There’s Nothing New Under the Sun 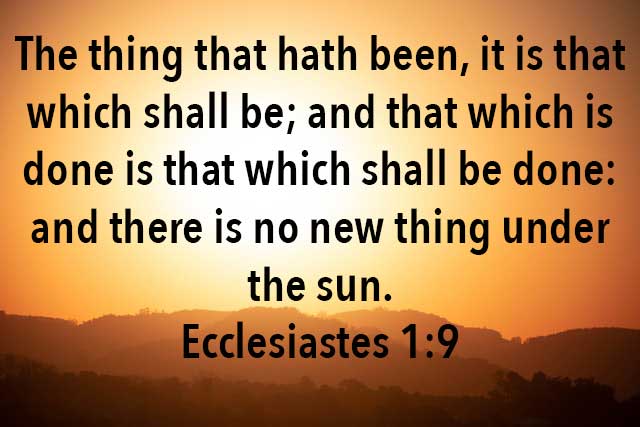 Indeed, there is nothing new under the sun. History repeats itself, and life as observed over centuries has little groundbreaking news to say about the human condition.  Read any book of history and you similar patterns of leadership, oppression, conflict, and resolution still working in the world today.

Similarly, the KJV has evergreen staying power. Its words are still sprinkled in and through the way we talk about life and offer bits of advice and wisdom. The poetry of the original language is unsurpassed, and nothing new can replace it.

On a deeper level, its story addresses the deep human need for a Savior, a fact that will never change, and makes its answer to this problem the greatest story ever told.

Bible Verses About Love From The KJV

Bible Construction: The Making Of A King James Bible

The King James Bible And The English Language

7 Features To Consider When Choosing A Bible